Angel Flight West is a nonprofit organization that flies people with cancer and other diseases to treatment, often from great distances due to the rarity of their illnesses and the scarcity of doctors who specialize in those illnesses. Pilots donate their time and gas and use their own planes to transport patients to and from treatment, often even offering to drive them the rest of the way to the hospital.

“They donate the time, their plane, the fuel. All of that costs them money,” said Jennifer. “It’s beyond heartwarming. It’s such an amazing program.”

The Zimmermans flew with Angel Flight West seven times from early 2014 to early 2015, with four different pilots. The flights cut their journey down from 4-10 hours to just an hour and a half, which meant fewer early mornings and missed days of work, as well as less stress.

“I do believe that it helps to heal the patient to not have to have those extra stresses,” said Jennifer.

The flights allowed the Zimmermans to relax and quickly became something they looked forward to. Emily even began to take an interest in aviation. “When we’re on the plane but we’re going to the runway, I do like watching that part, but I also like just being in the air and looking at the view,” said Emily.

“It definitely alleviated a lot of stress for us, and it was fun for Emily,” said Jennifer. “When you’re on your way to Stanford for chemo, at least you can have a little fun on the way there.”

An unexpected added benefit of the Angel Flights was that the planes were always clean and allowed Emily to fly free of the fear of germs, even in her immunocompromised state. “For a lot of people, this really is their only travel option, because you can’t get on a commercial plane, and there are people who live even further away than we did,” said Jennifer.

“If kids with cancer get colds or the flu, it’s a big deal,” added Ken. “It’s a cattle drive on the bigger airlines.” 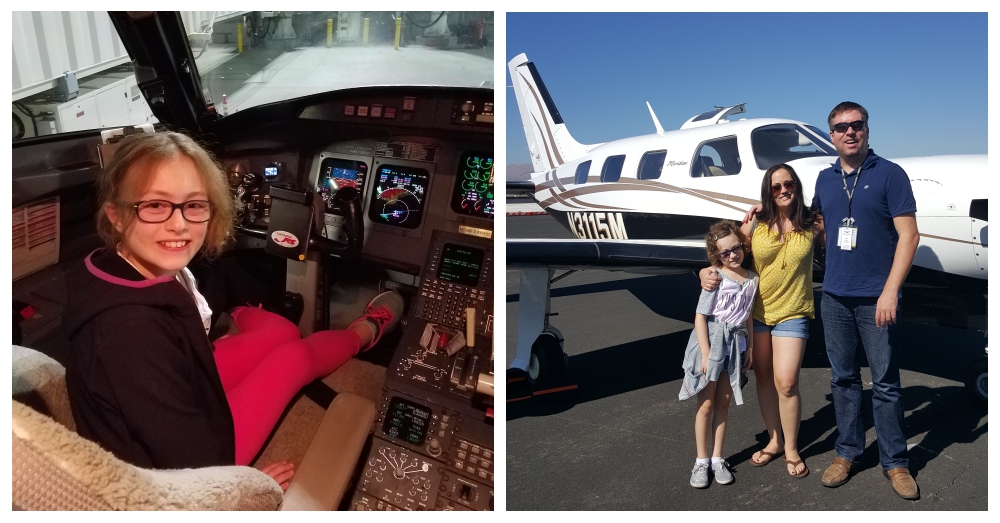 Because of her bravery through this whole journey, Emily has become known as the Cancer Warrior Princess, a name her family said is a conglomeration of nicknames that just kind of stuck together over time.

“She’s a little princess, and she’s definitely a warrior. It just kind of stuck,” said Ken. “We just kind of added all that in, and she became the Cancer Warrior Princess.”

Emily has officially been cancer-free for five years and is now back to being a normal almost-13-year-old girl, despite slight issues with her brain’s processing speed, which sometimes causes her to have trouble getting words out. Her favorite food is mac ‘n’ cheese, and her favorite colors are blue, pink, and purple, although she says, “usually I pick blue.” She enjoys swimming, making bracelets and other crafts on her Rainbow Loom, and listening to Taylor Swift and other country pop artists.

Emily’s parents are overjoyed to have their happy, healthy daughter back and grateful to all the people who helped make it happen. “The people that are helping us, they can’t even fathom how much they’re helping us,” said Ken. “When you’re caught in the world of cancer, it’s the little things that are huge. It’s priceless.” GreaterGood.org is partnering with Angel Flight West to continue providing these necessary flights, and you can help. It’s costly to organize more than 1,400 volunteer pilots making tens of thousands of flights across the western US. The organizational work AFW does is like running a small airline, and your gift will help keep these planes in the air.

For patients like Emily, the flights are a fun break in the middle of all the chaos. She told us it felt like travelling like a rock star, on a private plane with no baggage check. For her parents, it alleviated so much worry during the scariest time in their lives.

Help us provide round-trip flights to patients like Emily!
Make a difference