When Rebecca Boening felt herself beginning to suffer from a diabetic low as she was driving down a highway in Texas, she knew she needed to get some food in her system fast. So she pulled up to a local Burger King to place an order.

However, her health had already taken a turn for the worst. Boening began stumbling through her order, no longer able to think and speak easily. However, the stars were properly aligned that day, and two things went very right in the middle of everything that was going terribly wrong.

The first thing that went right was that Boening had the good sense to mention to the person working the drive thru that she was diabetic and needed food. The second thing that went right was that the person listening to Boening’s plea was Tina Hardy, a caring Burger King employee whose husband is also diabetic. Hardy immediately understood how dire the situation was and leapt into action, running to get some ice cream while Boening pulled around the side of the building. 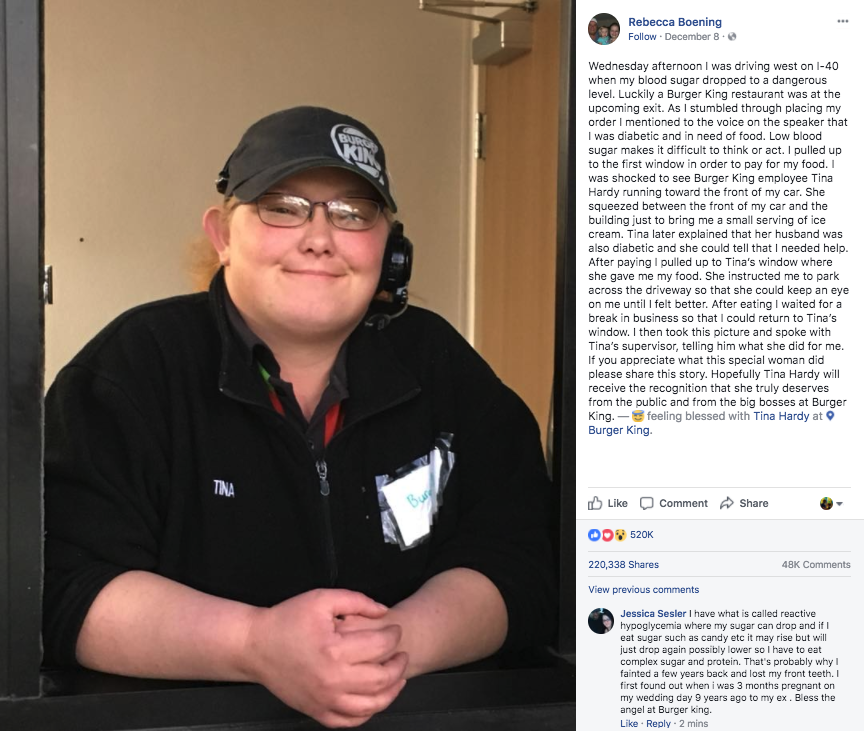 Hardy brought the ice cream out to Boening’s car, squeezing past the other cars in the drive thru lane to do so. After Boening had paid and was presented with the rest of her order, Hardy directed her to a parking space where she could be seen from the drive thru window so that Hardy could keep an eye on her until she felt better and was able to drive.

Boening pulled into the parking space, ate her food, and waited until she felt better. Then she went back to the building to thank Hardy for her help, snapping a photo to share with the world in appreciation of the kind gesture. She also spoke with Hardy’s supervisor about Hardy’s top-notch service.

“Hopefully Tina Hardy will receive the recognition that she truly deserves from the public and from the big bosses at Burger King,” Boening writes.

Since then, the Facebook post has been liked and shared hundreds of thousands of times. But Hardy has certainly deserved her fame. We need more people in the world like her!