After Going Into Diabetic Shock, Man Loses 150 Pounds By Walking Around Disneyland

This Disneyland employee has a fascinating weight loss story to share and people around the world are proud of him. He had allowed himself to fall into diabetic shock. If Mark Gautier had not been willing to change his ways, who knows what might have happened next? Now, he is sharing his story with the rest of the world. The Internet is rallying behind this man and his heartwarming story.

He shared his story in video form. The Disney Parks Blog was more than happy to provide him with a platform to do so. Mark first awoke from the coma that was caused by his diabetic shock back in 2013. It became apparent that he would need to make major changes. When Mark first came to, he was not able to speak. Even the prospect of writing things down was a major struggle.

“I tried to write notes because I couldn’t talk,” says Mark. All he could do is create chicken scratch. The man was completely devastated. He is someone who has always loved the arts. Lettering, drawing, and writing were his passions. He was facing the prospect of permanently losing his ability to do all of the things that he loved most. 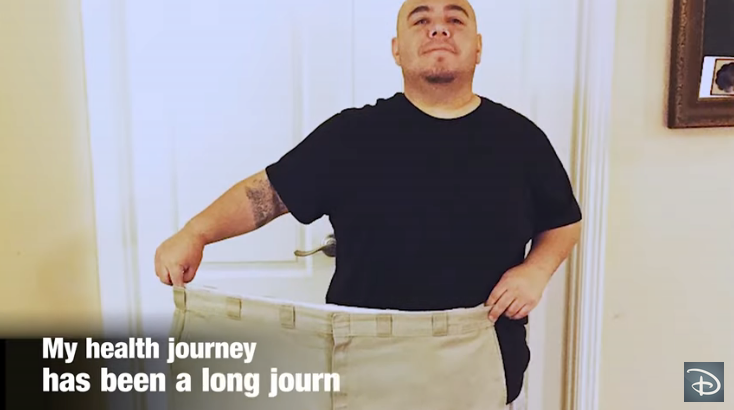 This is not something that many people would be able to deal with, but Mark is not most people. He decided to stop feeling sorry for himself and to start working on bettering himself. His wife, Vanessa, led the charge. She told him that he would need to make serious changes and she was not going to leave him to do it all by himself.

His wife bought the two of them passes to Disneyland, in an effort to help them shed the weight that they had gained. This would allow them to get plenty of exercise and still have fun at the same time. That’s the key to losing weight. You need to find activities that you actually enjoy doing. They even enjoyed their favorite Disneyland snacks while they were at it. By limiting their portions and remaining active, the couple was able to whip Mark into the better shape.

It took him five years, but he was able to lose 150 pounds! His health even improved to the point where the couple was able to conceive a beautiful baby girl. After a while, Mark knew that the park was his destiny. He applied for a job at Disneyland and they accepted him with open arms. He’s now a Disney Aspire member (working in educational investment) and a Disneyland Hotel Houseman. Way to go, Mark!

Chris Winters is an avid writer who also loves to hunt ghosts when she’s not at her keyboard. Although she once saw someone walking towards her with a sheet over their head, she’s yet to confirm that they exist.
Whizzco