“How far do I need to walk to be cured?” That’s what 11-year-old Noah Barnes asked his family before announcing he wanted to walk across America to raise awareness and research funds for type 1 diabetes.

Noah Barnes was diagnosed with type 1 when he was 16 months old, and he says that he hates having diabetes. He was fed up with the injections and constant poking, and he wanted to make a change.

“I just didn’t want to be it anymore,” he said about being diabetic. But inspiration struck when he watched a documentary about Terry Fox. After losing a leg to cancer, Terry ran across Canada to raise money for research. After seeing Terry’s story, Noah knew what he wanted to do to find a cure. 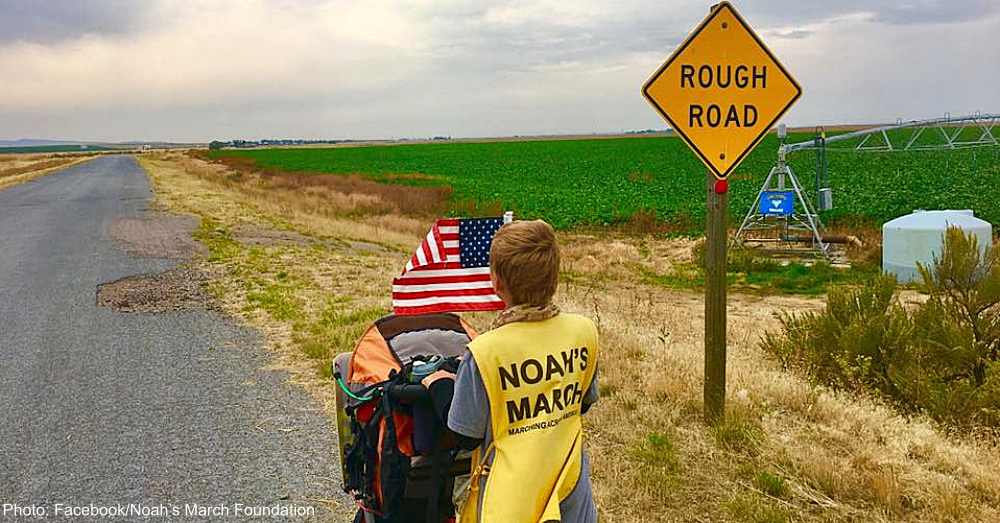 Noah’s parents, of course, were skeptical. Noah presented his plan to his parents using a map of The United States and legos, and he didn’t waver in his conviction that he could walk across the country. After seeing his determination, his parents began training, and when Noah was still undaunted, his father quit his job to make Noah’s dream possible.

Noah’s March (now also the name of the family’s fundraising foundation), began on January 1, 2017 in Key West, Florida. Noah and his dad, Robert Barnes, walk six days a week while his mom, Joanne, provides critical support and cares for Noah’s two younger siblings. Both parents work together to homeschool their children on the road.

Noah hopes to arrive in Blaine, WA on November 18. It’s fitting that the climax of their journey will happen during Diabetes Awareness Month!

If he completes his journey (and we know he will!), Noah will be the youngest person to have walked across the United States—after a whopping 4,000 miles! Noah’s March has raised funds and awareness with every step.

“We’re this close to a cure and we need everybody’s help!” Noah says.

We admire Noah’s big dreams and unmatched commitment to people dealing with type 1 diabetes. See you in Blaine, Noah!

**Update! Noah and his family arrived in Blaine, Washington in December of 2017. Congratulations!

“Next” to help fund diabetes research with a simple click!