This adorable white baby baboon has something called leucism. It’s not the same as albinism, in that it doesn’t affect the health of an animal. This baby was spotted by a travel photographer named Su Elliot while filming at the Marula Lodge National Park in Zambia.

A baby baboon this cute is about to gain celebrity status! But it is possible as he ages, he will darken, so he better enjoy all the attention now. Unfortunately, his color does attract predators so mom will have to keep a close eye on this wee one. I’m sure she doesn’t mind though one bit. Just look at him!!! 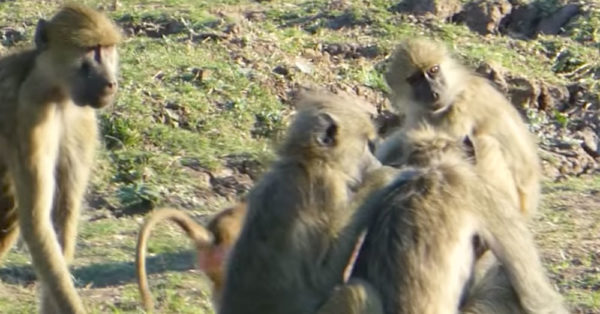 Julie Ellinger Julie resides in Northern New Jersey with her two kids, two dogs, cat and partner. She has two published books which make excellent trivets if you aren't a fan of poetry. She tolerates people but LOVES animals. If she isn't blogging, she's most likely cuddling with her pups, Paisley and Skyler.
Proper greatergood_ctg_belowcontent
Proper greatergood_ctg_footboard